Black holes are a place where the universe goes to die. General relativity predicts that they carry you to the end of time and then deposit you inside the event horizon, where it becomes impossible to escape.

And yet Dr. Caleb Scharf, the Director of Astrobiology at Columbia University, wanted to tell me about a different side of black holes. Their intense gravitational fields are also a source of energy, and they may have played a part in the fact that our galaxy had the right ingredients for life.

I’m excited to talk to you, Dr. Scharf.

Thank you. I’m very fond of unexpected connections in life and science, so Trending Sideways is a great place to talk for me too!

So your book, Gravity’s Engines

, is about everybody’s favorite astronomical phenomena: the black hole. Most people tend to think of them like cosmic destructive vacuum cleaners (even though from a distance they’re no different from any other gravitational object), but your book actually focuses on something very different. Black holes are also a source of creation in the universe. Could you tell us more about this? 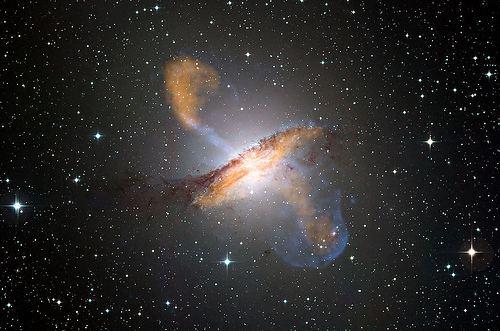 A real snapshot of a black hole “blowing bubbles” at the center of Centaurus A. (Thanks NASA)

Sure. You’re absolutely right that we’re used to thinking of black holes as where stuff goes to die, to vanish forever, and that is certainly a defining characteristic.

But it’s not the whole story, because stuff falling faster and faster into a black hole can release enormous amounts of energy on the way, energy that escapes because it’s produced outside the event horizon – that distance from their mass where even light can’t escape without getting stretched out to nothingness.

Drop a rock down a deep well and you’ll hear the splash before it’s gone for good – that splash comes from the energy of motion of the rock, gravitational energy converted to movement. Black holes are the deepest wells anywhere in the universe and so make the biggest splashes.

They can also spin, which drags the fabric of space around and around just outside the horizon, and they can carry an electrical charge, both of which further amplify the whole splash process.

All this energy in the form of light and accelerated subatomic particles can pump out whenever stars, planets, gas, or any matter drops towards a hole. We know it happens because we see it going on across the cosmos in our astronomical images and data. And because some black holes have gotten to be enormous, billions of times more massive than our Sun, the energy produced is colossal and can profoundly affect the surrounding environment.

So yes, black holes create energy. In fact they can do it more efficiently than even nuclear fusion. It seems so surprising and I wanted to write about this and really bring the black hole story right up to date for a more general audience.

Now, you say that black holes “blow bubbles.” How is it that a gravitational object that, by definition, doesn’t allow energy to escape, is capable of doing this? 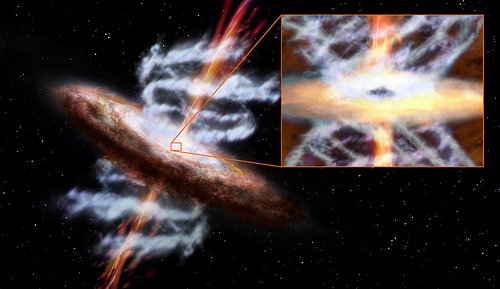 It’s that energy again, produced by stuff falling in, energy that is generated before reaching the point of no return. You have to remember, the event horizon of a black hole isn’t an actual surface at all; it’s just the limit of a region around the black hole’s mass. It’s a shroud that insanely dense matter draws around itself by distorting space to an extreme state.

Just outside that region stuff can and does escape, boosted by tapping into some of the black hole’s immense reservoir of gravitational energy.

In many cases the energy can spray out in beams or jets of subatomic particles moving at close to the speed of light. These jets can traverse hundreds of thousands of light years, but sometimes they’re inside a bigger structure like a cluster of galaxies. In a cluster there is actually a very, very tenuous mix of gas between all the galaxies.

The black hole jets squirt into this like when you blow through a straw into a drink, and rather remarkably they actually inflate bubbles in that gas – you can actually see this, bubbles that are hundreds of thousands of light years across.

Turns out those bubbles disrupt things enough to prevent that gas from cooling down to make new stars, so the holes can actually put the brakes on the growth of galaxies and the stars in them.

Of course, you’re the Director of Astrobiology at Columbia University, so the formation of life in the cosmos is obviously an interesting subject to you. Would you argue that black holes played an important part in whether or not life could form here on Earth, and perhaps elsewhere in the universe? 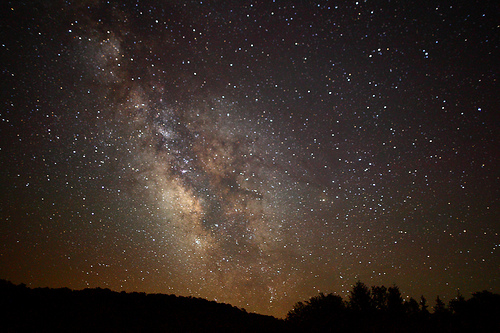 The Milky Way, our galaxy, seen from earth. A black hole lies at its center.

So this is where I have to choose my words very carefully or else sound a little crazy!

We know that there’s a long and complex chain of events that produce the right cosmic conditions for planets like ours – from the production of new elements in stars to the types of stars that harbor planets for billions of years. Because supermassive black holes and their host galaxies have ‘co-evolved’ over the past 13 billion years it means that the mix of elements and stars in a galaxy are related to what these black holes have been up to.

But not all places are the same. In some galaxies the black holes have fed on so much matter and produced so much energy that they may have effectively shut those systems down, preventing new stars from forming and so on.

We’re not in a place like that. The Milky Way seems to be a kind of ‘in-between’ place, its central black hole is only 4 million times the mass of the Sun, and gets fed rather gently. I make the argument that our existence in this type of galaxy may not be coincidence, so there really might be a linkage between black holes and life!

While we’re on the subject, I’m curious what your reaction is to NASA’s discovery that there may be DNA bases floating in Titan’s atmosphere. 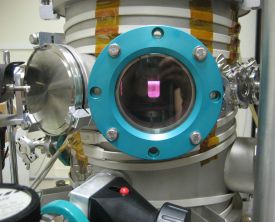 Chamber in which the NASA experiment was conducted.

I think this is a lovely piece of work. In a sense it’s an updated version of the classic Miller-Urey experiment done in the 1950s, now tuned to what we know about Titan’s atmosphere. While it doesn’t yet prove that this is actually happening in Titan’s atmosphere it certainly provides a strong motivation for astronomers or planetary scientists to find out! It shows just how much the cosmos is a ‘carbon-cosmos,’ given the opportunity the universe just loves making carbon-based molecular structures.

I would sound one note of caution though. When we hear about DNA bases or nucleotides and amino acids we tend to be optimistic that this can lead to the complex chemistry of life. This stuff is certainly part of the soup you need, but there’s no guarantee that the next steps can happen, in fact we really don’t know what those next steps are – so all the more reason to explore places like Titan!

Alright, we’ve touched on some interesting things here, and I’d really recommend people take a look at your book. But if there’s one thing you’d like people to take away from all this, what would it be?

The universe is a pretty wild and crazy place. And it seems to me that even if we get closer to finding an all-encompassing theory of how the physical laws of nature come to be, the way that they actually play out is always going to be full of surprises. Black holes and life are just spectacular examples of that and make for a tremendous story!

Check out Gravity’s Engines: How Bubble-Blowing Black Holes Rule Galaxies, Stars, and Life in the Cosmos

You might also be interested in my discussion about how gravity “escapes” a black hole, or introduce yourself to relativity with this intro for kids.

What is DNA Telling Us About the Past? Sam Kean’s Input