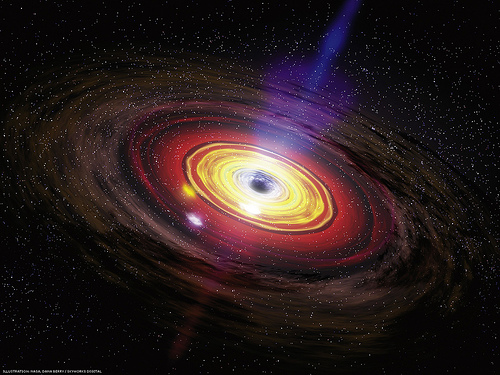 Black holes are often described as collapsed stars with such an intense gravitational pull that nothing can escape. This begs the question: “How does gravity ‘escape’ the black hole in the first place?”

What Space Elevators With Rocket Engines Can Tell us About Gravity

After Einstein pieced together the theory of special relativity, he still wasn’t satiated.

Special relativity explained how the laws of physics remained the same for anybody with constant motion, and the speed of light itself was a law of physics. How could everybody measure the speed of light to be identical even if they were travelling at different speeds?

After much work, and inspiration from previous physicists like Hendrick Lorentz, Einstein came to the realization that the only way to solve the problem was to abandon the concepts of universal time, length, and simultaneity.

But Einstein remained unsatisfied. Special relativity only explained the laws of physics for people in constant motion. It didn’t address acceleration, and it didn’t explain that feeling you get when you press the gas pedal in your car.

Eventually, Einstein had a flash of insight about the notion of free fall.

If you were sitting inside an elevator that suddenly fell, you would feel weightless. It would be identical to the sensation of an elevator floating in the depths of space.

Similarly, if an elevator in the depths of space suddenly fired its rockets and accelerated at 9.8 m/s^2, the sensation would be identical to the sensation of gravity on Earth. All physical experiments would turn out the same, and it’s all because your inertia resists that change in motion.

Einstein realized that gravity wasn’t a force at all.

Objects in free fall weren’t being pulled toward the center of the earth, they were just taking their natural path through space. It was the objects sitting on the surface of the earth that were being pushed.

They were being pushed away from the earth, just like your car seat pushes you forward when you accelerate.

This realization, of course, led to more questions than answers.

How Can You Accelerate and Remain Still at the Same Time?

It’s obvious that the earth is not bursting outward at 9.8 m/s^2, so why do us Earth-dwellers feel as though we’re shooting upward on a giant platform racing toward the sky?

The answer lies in a phenomenon called warped space-time.

Mass (which is equivalent to energy) appears to have the bizarre property of causing space to contract around it over time. The easiest way to picture general relativity is to imagine that the earth is dragging space toward itself.

Objects that aren’t accelerating relative to space are being dragged toward the earth, as space itself “falls” downward.

Objects sitting on the surface of the earth are accelerating, because space is being dragged down past them, forcing them to accelerate upward through it.

Why Can Gravity “Escape” a Black Hole?

To answer this question, let’s start by examining what a black hole is.

According to general relativity, a black hole forms when there is so much mass in a small enough area that space-time is warped to the point that no path in space-time exists to escape.

This is equivalent to saying that there is no future in which an object leaves a black hole after it has entered it. It can only leave it before it enters it: an obviously nonsensical statement. You can’t travel outside of a black hole any more than you can travel to yesterday.

And this is why gravity doesn’t need to escape a black hole.

The event horizon of a black hole isn’t some wall that gravity needs to break through in order to reach the outside. It’s merely an imaginary line we draw. If you’re inside a black hole, then on the other side of that line, space itself is accelerating away from you so rapidly that you could never catch up to it. It’s forever out of reach.

Space just keeps warping as you ride it toward the center of the black hole, until at some point you realize there’s no going back.

For an intro to relativity, take a look at my post on relativity for kids. For more on black holes, see my discussion with Dr. Caleb Scharf, or take a look at what physicist Leonard Susskind has to say about it and the strange world of quantum mechanics:

The Black Hole War: My Battle with Stephen Hawking to Make the World Safe for Quantum Mechanics

Why You Can’t Remember Things You Know