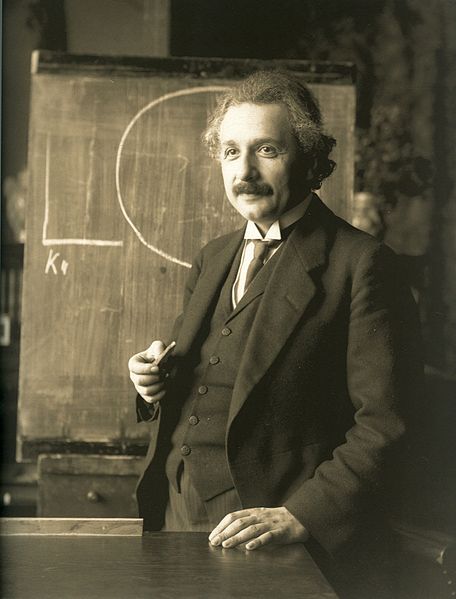 Welcome to part 3 of my series on the theory of relativity for kids. Start here if you missed the intro. Up until now, we’ve been talking about something called special relativity. Today, we’ll start talking about general relativity, a theory that explains the bizarre ways that gravity works.

Why is everything up until now called special relativity? It’s because it’s all about special circumstances. We’ve talked a lot about things travelling close to the speed of light, but we’ve pretty much ignored how things speed up or slow down.

Speeding Up and Slowing Down Are the Same Thing

Imagine that you are sitting in your car while your mom drives you around. Now pretend she pushes down hard on the gas pedal. What happens? That’s right, you feel a force that pushes you into the back of your seat. This doesn’t happen because you are going fast. It happens because you are speeding up.

Scientists have a special name for speeding up. They call it acceleration.

Now imagine what happens when your mom slams on the brakes. You will also feel a force that pulls you forward.

All of this happens because your body doesn’t want to change speed or direction. The force you are feeling in both cases is the same. When you are slowing down, that’s actually the same thing as saying you are speeding up in the opposite direction.

Sometimes scientists will call slowing down deceleration. But they might also call it speeding up, or accelerating, in the opposite direction.

Again, the reason this happens in both cases is the same. Nothing in the universe that weighs anything at all wants to change direction or speed. Scientists call this inertia. The more inertia something has, the more it weighs, and the less it wants to change speed or direction.

If something has a lot of inertia, it is very hard to make it accelerate, like a giant bolder.

For the exact same reason, it is very hard to make something with a lot of inertia stop, just like a train takes a long time to stop even when its brakes are trying as hard as possible.

Einstein realized that the theory of special relativity didn’t really explain how things sped up or slowed down. It sort of ignored the idea of acceleration, and the way that inertia makes you feel like you’re being pulled back and forth as your mom speeds up, slows down, and takes turns in your car.

One of the things that helped Einstein figure this out was to imagine what it would feel like if you were inside of an elevator floating in outer space.

Of course, there would be no gravity inside of the elevator. If you were holding a ball and you let go of it, it would just float in the air next to you.

Einstein realized that this was important. If things felt the same whether you were floating in outer space or falling toward the earth, maybe there was some kind of connection.

Now imagine that your elevator has rocket engines attached to it. If you were floating in the middle of space, and you fired your rockets, you would feel that same force that you feel when your mom pushes the gas pedal in your car.

After thinking about this and doing some very complicated math, Einstein was able to figure out that there was something very similar going on in both of these cases. He figured out the secret of gravity.

The secret that Einstein figured out is that gravity isn’t really a force.

When you are sitting in your car, and your mom pushes the gas pedal, there is no mysterious force that pushes you into the back of your seat, remember? It’s just inertia.

Your body doesn’t want to move, so when the car speeds up, it speeds up against your back. It might feel like a force is pushing you backward and toward your seat, but really the seat is actually pushing you forward.

Einstein realized that this is what was happening with gravity.

When you stand on the ground, it might feel like a mysterious force called gravity is pulling you down against the ground, but really, the ground is pushing you upward, the same way that your car seat pushes you forward.

Does this sound confusing? It should! The Earth isn’t getting bigger, so how come everybody who stands on the Earth feels like the Earth is rushing up toward them? Why does it feel like the ground is speeding up toward you and pushing you upward if the Earth is always the same size?

Einstein realized there was only one way that this could be possible. Space itself was falling toward the earth!

This is why everything falls toward the earth by speeding up in the same way. If you drop any two objects, both of them will hit the earth at the same time. (This is different for some things, like feathers, but only because the air gets in the way).

Why do they both hit the earth at the same time? Because space is falling. The objects aren’t really changing their speed at all. They are staying in the same place in space, and space is moving toward the ground.

Things are different for you while you stand on the ground. Because of inertia, your body doesn’t want to change its speed or direction compared to space. Since space is falling toward the ground, your body wants to go with it. The ground doesn’t let you, it pushes you up against space, the same way that your car seat pushes you forward.

And that was how Einstein figured out the secret of gravity. Things don’t fall, space does. That’s why when you fall, it doesn’t feel like you are speeding up. You aren’t speeding up: not compared to space itself. It’s the ground that is speeding up, because space is falling through it!

Remember, if this is confusing, that’s okay! Relativity is a very confusing topic. That’s why it took Einstein to figure it out. You might need to read this a few times or go back to the beginning before it makes sense. There is nothing wrong with that at all.

Next week we will talk about what all of this gravity stuff means when we think about how it affects light. As you might have figured out already, there’s going to be some weird stuff going on with time and space!

If you’re an adult who wants to teach their kid relativity with some interesting exercises and thought experiments, this is a good book:

Albert Einstein and Relativity for Kids: His Life and Ideas with 21 Activities and Thought Experiments (For Kids series)