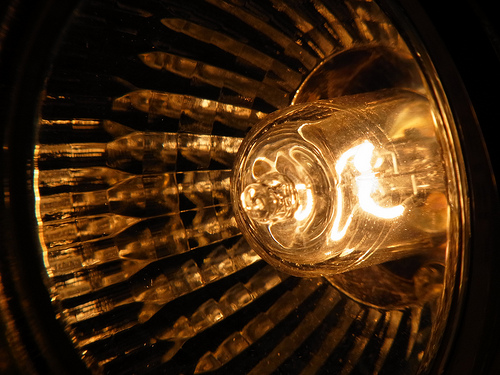 It seems like a basic enough question, but when you realize that energy can’t be created or destroyed, things get less obvious fast. The knee-jerk reaction is to say that the light gets absorbed into the walls, but how? What does it even mean to say that light gets “absorbed?”

Photon: The Particle That Didn’t Exist

If you’ve read a pop-sci book here or there, you’ve probably heard of the photon: the little bundle of light. It carries light from here to there. It bounces back and forth between electrons and protons, carrying the electromagnetic force and holding the atom together.

The particle you’re imagining is a lie.

Don’t get me wrong, the photon is a real thing, but you’re not going to get any genuine understanding of what’s going on here unless you banish that word “particle” from your mind.

Instead, we’re going to take a journey back in time, and talk about the centuries old concept of the electromagnetic field. Don’t worry, we’ll get back to the bizarre world of quantum mechanics soon enough.

Just What is this “Field?”

Fields tell things where to go. An object will naturally slide from high energy to low energy, like a rock down a hill. The “energy per unit charge” tells a charged object how much energy is at each point in space for a particle with that amount of charge.

If a particle has the opposite charge, everything gets flipped upside down. The hill becomes a valley.

We call it the electromagnetic field, instead of the electric field, because the two are related. A magnetic compass heading north will end up running in circles around an electric wire.

But we also have to remember that charged objects change the field too.

Charges don’t change the landscape of this field immediately. If a positive charge suddenly shifts it’s position, the field around it will ripple outward and reorganize itself.

That is what light is, a wave in the electromagnetic field. The only problem is, real particles don’t quite look like the objects we imagined here. In fact, it turns out, they’re also waves.

Here’s where I’m going to give you a tool that should help you think about quanta without having an aneurysm. Once again, I’m going to ask you to throw out that word “particle.” Just forget you ever even heard it. Take that word, and mentally replace it with “unit” every time you hear it.

Now picture a world with no electrons. Instead, the world is filled with an omnipresent electron field. This field is everywhere. It has peaks and valleys, just like the electromagnetic field.

This field is measured in units of electron mass, electron charge, and electron spin, and it carries additional energy in the form of electron momentum.

To measure this momentum perfectly, we’d need the waves to be perfectly evenly spaced throughout the entire universe. The electron would be everywhere and nowhere.

Alternatively, you can smoosh the waves together into the form of a hill with a few ripples around it. Now you have a better idea of where the “electron” is, but the waves aren’t evenly spaced, so we know less about it’s momentum.

Here’s a rough idea of what this looks like, thanks to Wikipedia:

This is how we can gather together some energy from the electron field and put it mostly in one place, then call it an electron for our own convenience.

Energy gets transferred to and from this electron field in discrete units that we call electrons. That’s the only thing about the electron field that really brings particles to mind, but it’s a loose analogy and, in my opinion, it confuses things more than it helps.

And this is, more or less, how every “particle” in the universe works. It’s actually just energy carried as vibrations in a quantum field.

But these ripples still travel through the field like waves. They spread out, interfere with each other, and mix together.

So, now that we understand electrons and photons aren’t much like particles at all, we can finally talk about how a photon gets absorbed into the wall.

When a Photon Hits Your Wall

Lets start with the atoms in your wall.

As you already know, an atom is made up of negatively charged electrons surrounding a positively charged nucleus, but if you’re picturing electrons “orbiting” or “buzzing” around the nucleus, that’s not how it works.

Remember how the momentum of the electron field is measured by how fast the ripple is vibrating? These ripples can interfere with each other, cancelling each other out in some places, and reinforcing each other in others. This causes electrons to coalesce around nuclei in interesting shapes, like this: 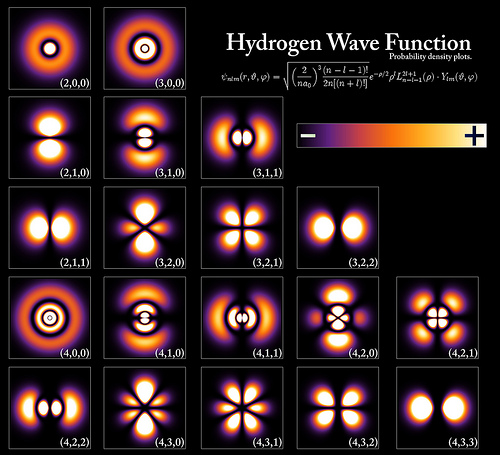 And so, the shape of the electron ripple will change if it’s momentum changes. But only certain levels of momentum are possible. The others would simply cause the electron to interfere with itself and vanish out of existence, an impossibility. And so, we say, there are only certain “energy levels” that the electron is capable of having.

When the photon ripples up against one of these atoms, there are a few things that can happen. It can reflect off of the atom, it can ripple right through it, or it can be absorbed.

When the electron falls back down to a lower energy level, this energy can get transferred back to the electromagnetic field as another photon, but this isn’t always what happens.

Check this book out to learn more about quantum mechanics

The Scientific Consensus On Climate Change