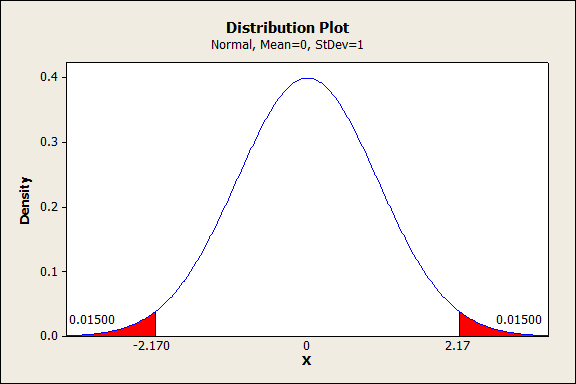 The p-value, while it is one of the most widely-used and important concepts in statistics, is actually widely misunderstood.

Today we’ll talk about what it is, and how to obtain it.

(If you’re in a statistics class, or using this stuff out there in the real world, consider ordering “Statistics in Plain English” by Timothy Urdan. It’s got the readability of the Idiot’s Guide on the same subject, and (thank God) a non-textbook price, but without the glaring mistakes.)

Update: As I’ve been doing with my newer posts, I decided to put together a spreadsheet you can use to skip the dirty work. This spreadsheet calculates the p-value for Z-tests, t-tests (both single and two-sample), and proportion tests.

The P-Value: What it Really Means

The P-value is one of the biggest sources of confusion in statistics, and it’s not uncommon for researchers to use the wrong definition: not when they compute it, but when they think about it. So read this definition carefully:

The P-value is the probability that our data would be at least this inconsistent with the hypothesis, assuming the hypothesis is true.

This sounds simple enough, but it’s very tempting to interpret this in one of the following incorrect ways:

The Null and Alternative Hypotheses

Before we move on, it’s important to understand that you can’t use a high P-value to “accept” a hypothesis, even though this terminology is sometimes used. It’s better to say that you “failed to reject” the hypothesis.

For example, let’s say we wanted to know if a new drug had an influence on IQ. These are what we would want to pick as our null and alternative hypotheses:

These are the only two options, so if we reject the null hypothesis, we can accept the alternative hypothesis.

This is where things get muddy, and it’s why there’s really no predefined “formula” that will give you your P-value. The way you set up the test is going to depend on what your hypotheses are, and sometimes on how skewed your data is.

For the remainder of this article, we’re going to talk about some of the most common tests, how they work, and how you find the P-value. Let’s get started.

Z Test for a Population Mean

When to use the test: You want to test whether your sample average is statistically consistent with a hypothesized population average.

These conditions are unrealistic under most circumstances. The z test is mostly used to introduce students to statistical testing and is rarely used elsewhere.

You’ll need the following data in order to perform a z test:

Then you will calculate something called the one-sample z test statistic, like this:

The z statistic is simply the number of standard deviations you are from your hypothesized mean. Plug this into a table or statistical software in order to get the P-value. Don’t do this haphazardly, though. Keep your null and alternative hypothesis in mind.

Suppose, for example, we were testing whether a drug impacted IQ. We might choose the following as our hypotheses:

Alternative hypothesis: The population mean IQ  of those who take the drug is not 100.

The area in red is 0.015 + 0.015 = 0.030, 3 percent. If we had chosen a significance level of 5 percent, this would mean that we had achieved statistical significance. We would reject the null hypothesis in favor of the alternative hypothesis.

We would conclude that we had evidence that the drug caused the average IQ to deviate from 100 IQ points.

As an aside, suppose we had chosen a different alternative hypothesis:

In this case, the P-value would be 1.5 percent, not 3 percent, and our evidence would be stronger.

The One-Sample t Test for a Population Mean

When to use the test: You want to test whether your data is consistent with a hypothesized population average, under the more realistic situation where you don’t know the population standard deviation.

These conditions are just rules of thumb and don’t necessarily apply everywhere.

The t statistic has the same basic meaning as the z statistic, and most other standardized statistics. It is the number of standard deviations your sample average is from the hypothesized mean.

We approach this test pretty much the same way we approach the z test,  except this time we need to know one additional thing: the number of degrees of freedom.

Once we know our t statistic and our degrees of freedom, we can just plug them into a table or statistical software.

Borrowing from the previous IQ example, suppose our t statistic was 2.170. Now let’s say we chose a significance level of 5 percent and these were our hypotheses:

Now suppose our sample size was n=15. This means we would have 14 degrees of freedom, and our graph would look like this: 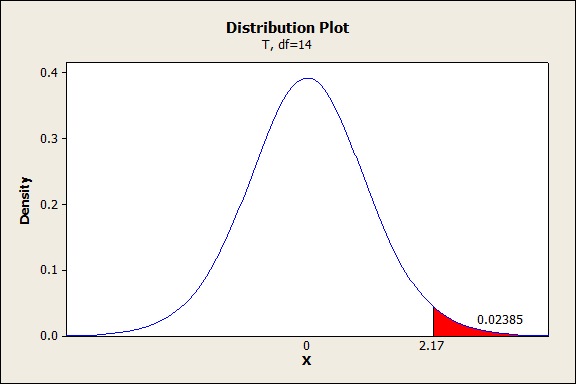 So our P-value is 2.385 percent. Note that this is higher that the 1.5 percent we had earlier for the same set of hypotheses. Still, even with a sample size of just 15, we have strong enough evidence to reject the null hypothesis at the 5 percent significance level.

To reiterate the meaning of the P-value, this result means there is only a 2.385 percent chance that our t statistic would be at least this high if the true population mean were 100 IQ points.

As an aside, note that if our alternative hypothesis had been that the IQ was lower than 100, the P-value would be 100-2.385=97.615 percent. This does not mean that we would accept the null hypothesis as true. It simply means that we wouldn’t be able to reject it.

When to use the test: You gather two sets of data from the same set of subjects, and you want to test if there is a difference between the two sets of data. For example, you might treat the same set of patients twice: once with a placebo and once with an experimental drug. Your goal would be to see if the drug had different effects than the placebo.

The t statistic that you calculate is exactly the same:

In this case, we might choose these as our hypotheses:

From here forward, the test looks exactly the same as the one discussed above.

When to use the test: You are performing an experiment where you treat two samples differently, and want to determine whether the different treatments resulted in statistically significant different results.

This test is a bit more complicated, in particular because the degrees of freedom are calculated from a much more complicated formula. Statistical software packages will handle this part for you under normal circumstances, but if you need to have the formula, here it is:

This is actually an approximation, but it’s accurate when each sample size is 5 or larger.

The t statistic itself isn’t too complicated, but it does look different:

From here forward you just use the t statistic and the degrees of freedom to find your P-value from a table or software, as discussed above. The null hypothesis of this test is that both samples have the same population mean.

Significance Test for a Proportion

When to use the test: You want to test whether your data is consistent with a hypothesized proportion, instead of a mean. In this case, you need to be measuring something that is either/or. For example, you might want to test whether more than 50 percent of people taking a prescription drug have an IQ higher than 100. You either have an IQ over 100 or you don’t.

The formula for testing a proportion is based on the z statistic. We don’t need to use the t distribution in this case, because we don’t need a standard deviation to do the test. Here is the formula: 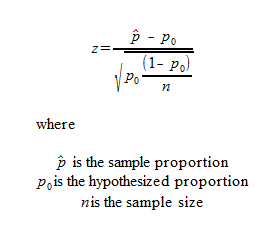 Unfortunately, the proportion test often yields inaccurate results when the proportion is small. Again, if you follow these rules of thumb this isn’t typically a problem:

However, another experimentally verified solution is to make this substitution:

which results in more accurate results under most circumstances. This is called, un-creatively, the “plus 4″ method.

As usual, once you have the z statistic, you can easily find your P-value in a table or by plugging it into statistical software. As always, pay attention to your alternative hypothesis (less than, greater than, or not equal to), or you could end up with a P-value that is off by a factor of 2.

The null hypothesis for this test is that the sample proportion comes from the hypothesized proportion.

When to use the test: You are performing an experiment and want to test whether two sample proportions come from the same population proportion, much like the two-sample t test, except with proportions.

The conditions are essentially the same as for the single sample proportion test.

Again, the formula for the test is based on the z statistic, but it takes on a different form since it involves two samples:

The null hypothesis for this test is that both sample proportions come from the same population proportion. If you understand the previous tests, it should be fairly straightforward what to do with the z statistic that comes out.

For a more accurate result, you can again use the “plus four” method discussed in the previous test. In this case, just add one success and one failure to each sample proportion, and increase each sample size by 2.

This is by no means an exhaustive list of the statistical tests available to find P-values, but it should give you an idea of how to think about the subject. If you need more, pick up that book I told you about earlier. Or go ahead and download that spreadsheet by signing up for updates below:

Learn how to do statistics easily in Excel

Back to the front page