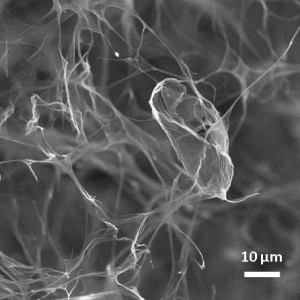 A breakthrough in graphene technology has led to a new form of the material capable of supporting 50,000 times it’s own weight. At densities between 3 and 0.5 milligrams per cubic centimeter, it’s also about 1,000 times lighter than Styrofoam. As if that weren’t enough, it can be squeezed down to less than 20% of its original size and spring right back into shape without permanent deformation. Then there’s the fact that it conducts electricity.

Graphene is one of the most promising miracle materials under investigation. It has shown promise as a component in microchips, quantum computing, solar cells, filters fine enough to remove salt from water, and more.

The secret to the material’s success is it’s structure. It resembles chicken wire made up of carbon atoms. The atoms are molecularity bonded together, which is the secret to its strength and other exotic properties. In this sense, sheets of graphene are like gigantic molecules.

But a major obstacle that materials scientists are dealing with is the fact that graphene sheets are so thin that they are very fragile and difficult to work with. Most practical applications suggest stacking sheets on top of one another, but since the sheets are just an atom thick, this is impractical.

This new breakthrough is a very promising step forward. A team led by Dan Li at the University of Clayton in Australia has found a way to produce a 3-dimensional form of the material, rather than the traditional sheets.

To accomplish this, graphene oxide flakes were placed in water and frozen. The ice crystals pressed the flakes together, forming a strong network of graphene sheets in the cracks between the crystals. When the ice was thawed, this incredibly light, strong, and elastic network of carbon atoms remained in place.

This technique has been used before, but the results were less than exciting. Li theorized that this was the result of the oxygen bonds in graphene oxide. These bonds allowed the material to survive in water but also prevented the carbon atoms from bonding with each other as strongly as they typically do.

In this experiment, they resolved this issue by partially stripping away the oxygen coating during freezing, allowing the carbon atoms to latch onto one another.

After thawing, the oxygen was then completely stripped away, resulting in increased strength.

The new material is expected to have applications for flexible electronics, biomedical technology, composite materials, and more.