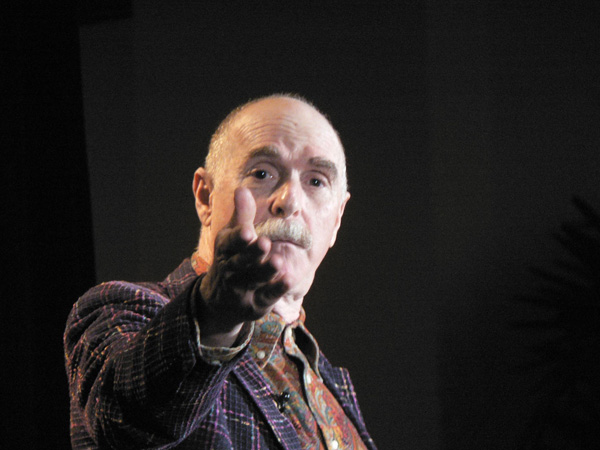 Social media is everywhere now, but there was a time not so long ago that it wasn’t much more than an abstract theory. In the 1980s, a few academics theorized about virtual worlds, and Howard Rheingold was among them.

Rheingold has written extensively about the capacity of technology to act as a “mind amplifier.” His latest book, Net Smart

, discusses how the “social web,” a term that he coined in 1996, is making us smarter, and more distracted. He discusses the “knowledge divide” and the myth that all young people are digital wizards.

Between launching a book and teaching students how to set up blogs, Rheingold is a very busy man. He didn’t have a lot of time for me, but what he had to say was very intriguing.

You’ve been active on the internet since before most people knew it existed. I’d be interested to know if you saw things like “social media” coming, and what they have to say about human nature and our future.

I wrote “virtual communities” for Whole Earth Review in 1987 and coined the term “social web” (look it up) in 1996, so, yes, I’ve always focused on the fact that people are social animals and that new media that enable people to communicate in new ways will give birth to new social forms. I’ve written extensively on these issues. See http://rheingold.com/social-media/ for extensive documentation.

Okay then, this stuff is certainly nothing new to you. In your latest book, Net Smart, you discuss a concept you coined called “infotention.” What is it, and what are the implications?

Attention to information. Much controversy has erupted over the distracting qualities of social media and the illusion that multitasking increases productivity.

What neither of these very real concerns have addressed is the question of whether (and how) attention can be trained.

Certainly, evidence from ancient contemplative traditions indicates that “attention to attention” can indeed tame what appears to be a wild and easily distractible attention processes. Neuroscientific research confirms this.

My work has concentrated on how to establish habits of attention to intention, so that when we are online (or using mobile media), we, not the attractive distractions afforded by the media, are in at least partial control of how we deploy our attention.

Do you believe that networks themselves are in the process of replacing what we typically refer to as “leadership?” Furthermore, is this process actually anything new, or has it been happening for quite some time?

Networks are a way in which power and influence can be deployed. Just as Yochai Benkler claims that social production joins the market and the firm as the means by which economic production is organized, I would not say that networks wholly or in every sphere replace traditional hierarchies, but are now joining hierarchical and market-based leadership as means of organizing political activity.

I appreciate your insights, Howard. This is illuminating.

Why You Will Soon Be Seeing Ads On This Site