This week we look back on yet another record set for quantum entanglement. Meanwhile, astronomers spot a spiral galaxy in images of the early universe, the very first of its kind. And could a Japanese mathematician have proven a relationship between prime numbers? 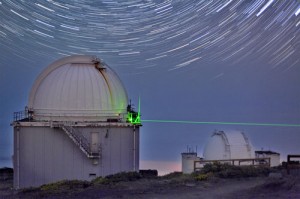 It’s starting to feel like they’re setting a new record for quantum entanglement every day. Last month I reported that the record had been set at 97 kilometers. Now, scientists from the University of Vienna and the Austrian Academy of sciences have expanded it again, to 143 kilometers.

The setup was much the same as in the previous Chinese experiment, where entangled photos were separated across a lake. This time around, they were separated between two islands.

Quantum entanglement takes advantage of the strange property of subatomic “particles” to occupy more than one point in space at the same time. The result is that when a photon is measured, the other photon always has the opposite polarization. This precarious situation collapses as soon as one of the photons is measured, making quantum encrypted data impossible to intercept.

This experiment was a major success in that it not only achieved large distances, but successfully transmitted the classical data as well as the quantum data, a crucial component for any communication system in the future.

The long distance gives researchers hope that such signals could be sent via satellite, allowing for the creation of a “quantum internet” that would allow for complete privacy. Quantum entanglement can also be harnessed, in theory, to solve certain types of computational problems almost instantaneously in comparison with traditional computers.

A Galaxy Where it Shouldn’t Be

David R Law and colleagues recently spotted a fairly normal looking spiral galaxy. The surprise? It’s redshift signature tells us it’s moving away from us at a rapid pace.

Since the universe is expanding, the speed of a galaxy gives us an estimate of how far away it is. This one appears to be 10.7 billion light years away, meaning it came into existence, at most, a mere 3 billion years after the Big Bang.

Other galaxies with the same redshift tend to look lumpy. The standard explanation is that galaxies were simply too hot back then for them to form the more attractive spiral structures we see often in more aged galaxies.

The authors of the paper suggest that this find could mean that we simply lack the technology to spot spiral galaxies from that era.

Spectral analysis of light given off by ionized gas in the galaxy proves that it is hot as ever, challenging the existing model. However, the kinematics of the galaxy suggest that it may be going through a “merger” with a smaller galaxy, which could explain the spiral structure, which may only be temporary.

Related: Bang!: The Complete History of the Universe

A Pattern in Prime Numbers?

Prime numbers are numbers that are divisible only by themselves and one. If we ever receive a message from alien life forms, it will probably contain prime numbers, because they don’t occur (in order and isolation) in nature.

For quite a while mathematicians have tried to find out if there is any kind of pattern in the prime numbers. Now, a Japanese mathematician named Shinichi Mochizuki may have proven such a pattern exists.

I say “may have” because the proof is so complex that it has most high level mathematicians scratching their heads.

Specifically, Mochizuki has developed a proof for what has come to be called the ABC conjecture, which was independently developed, but not proven, by David Masser and Joseph Oesterle in 1985.

The conjecture makes a statement about pairs of numbers (A and B) that have no prime factors in common. They are then added together (to make C). You then multiply together A, B, and C. You take the prime factors of that number and start multiplying them together, and the largest number you can make that can’t be divided by the square of any number is called the square-free part of the product ABC, or sqp(ABC).

The conjecture may not sound all that interesting, but it turns out to be logically equivalent to some of the biggest questions and problems in mathematics. Proofs of many other important theorems follow immediately from it.

Mochizuki, a mathematician at Kyoto University, has proven many other deep theorems in the past, making his claim of a proof much more credible.

Related: The Math Book: From Pythagoras to the 57th Dimension, 250 Milestones in the History of Mathematics (Sterling Milestones)