I’ve decided to start doing a regular feature on this site to keep things moving. From now on, every Friday I’ll be touching base to keep you updated on some of the latest discoveries in science. This Friday, we discover that “random” errors in drumming aren’t actually random, and magnetic fields influence our dreams, among other things. 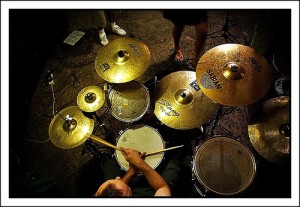 A study by Harvard asked why “humanizing” computer programs, which randomize drum beats, don’t sound right to listeners. They analyzed the rhythm of a Ghanaian drummer, and looked for patterns. But they weren’t looking for the patterns he meant to drum. They were looking for patterns in his errors.

The drummer was a serious professional, and typically hit the drum within 16 milliseconds of the perfect tick of a metronome. That’s less time than it takes for you to blink your eyes.

What they discovered was that the errors in his drumming actually had fractal properties. He would play slightly ahead of the metronome for a predictable number of beats, then fall behind, then ahead again. Each “error” was predictable from the previous errors, and the errors looked the same on the short and long time scales.

Because there is a pattern to the errors in drumming, it’s pleasant to the ear, which is why it sounds better than the random error in a computer attempting to sound human.

While the scientists don’t currently know what mechanism in the brain sets these rhythms, the same correlations are found in brain waves and the rhythm of the heart.

Psychologist Darren Lipincki in Berlin, Germany, kept a log of his dreams from 1990 to 1997. After hearing that studies have linked fluctuations in the earth’s geomagnetic field to the presence of a sleep-related hormone called melatonin, he decided to look for correlations between his dreams and geomagnetic activity.

After rating his dreams on a 5 point scale, 1 being standard fare, 5 being the craziest LSD trip imaginable, he compared these ratings to the historical geomagnetic data.

He discovered that his most bizarre dreams tended to occur when the magnetic field was weakest. Since Lipincki once worked at the Center for Space Medicine, he undoubtedly wondered whether space travel would cause people to have more bizarre dreams.

Lipincki is careful to warn that this study was based on his own dreams, and shouldn’t be considered conclusive yet. A larger study will be necessary to verify if this is more than a fluke.

Dreams aren’t the only thing magnetic fields may have an influence on.

Calculations performed by Kai K. Lange and colleagues predict that under intense magnetic fields, new types of molecules could form. While normal molecular bonds are caused by the behavior of electrical fields, these bonds would be caused by magnetic fields.

Among other things, this would allow molecules made from helium, which is typically nonreactive, to form. This would open up the door for all kinds of new materials that can’t exist under normal circumstances.

The typical MRI machine generates magnetic fields around 7 Tesla, and the strongest fields humans can generate are around 40 Tesla, but the fields necessary for these molecules to form would be thousands of times stronger.

This might make it sound as though the prediction is untestable, but in fact, magnetic fields these strong do occur regularly around white dwarfs, which are collapsed starts too light to become neutron stars or black holes. (The sun is expected to become a white dwarf after it dies.)

It is possible that these new molecules will be observed through observation of white dwarf spectra. New magnetic technologies may also make it possible to achieve these levels for brief moments. Some of the more advanced properties of these new types of materials haven’t yet been explored.

A protein called RfaH evidently has the ability to unfold itself and re-fold into an entirely new shape. This means that proteins may be much more dynamic than previously thought.

Proteins make up most of the structure and machinery of living things. Proteins interact with one another in ways that drive most of the chemical reactions that allow life to go about its business.

If protein unfolding is common, it means that each protein is capable of taking on more than one role and serving a completely different set of functions. This finding could be revolutionary for the future of biochemistry.

The Casimir effect is the result of the weird world of quantum mechanics. It is based on the fact that each elementary particle can be thought of as one unit of a field.

Just as there are magnetic and gravitational fields, there are fields for every other type of particle. Each particle can be thought of as a unit of energy being carried by this field.

To put it simply, when you place two metal plates next to one another, there are only a few harmonic ways for the field to fluctuate in between the two plates. Outside of the plates, on the other hand, this field has the freedom to fluctuate in a larger number of ways.

This results in a slight pressure on the plates that causes them to be pushed together. The Casimir effect is incredibly small, but it has been observed.

However, there was a debate about how to properly model the Casimir effect. A recent experiment has finally determined which model was correct.

The two models are the Drude model and the plasma model. The Drude model treats conductors as though they consisted of electrons and relatively positive “electron holes” that moved around freely.

The plasma model instead treats conductors as though they contained electrons which moved freely but which were contained within an unmoving lattice of “electron holes.”

These two models are only approximations of quantum theory, which is too complex to make accurate calculations of this scale using modern technology. The models make different predictions. This experiment put the predictions to the test.

Tentatively, the experiment suggests that the Drude model is more accurate on both short and long distance scales. This means it is most accurate to think of “electron holes” as moving around along with the electrons.

Madeline Ashby on “vN,” Women in SF, and Futurism