This week we learn that people will completely reverse their opinion, and justify it, if they are fooled into thinking they answered a survey question differently than they actually did. Meanwhile, a fiber optic cable sends the equivalent of 5,000 HDTV movies per second, a common drug halts muscle aging in mice, and listening to music while you study and sleep could help encode memories. 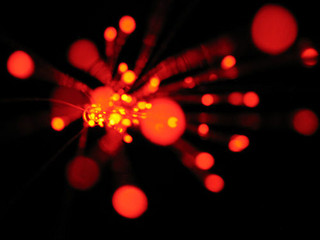 NTT, a major Japanese telecommunications company, recently set an amazing new record for communication densities and distances. The amount of data sent is roughly equivalent to 5,000 HDTV videos per second.

With the help of researchers from the Technical University of Denmark, Hokkaido University, and Fujikura Ltd, engineers were able to meet the new record in part by cramming 12 sub-fibers into a single cable.

The ability to reach distances over 50 kilometers is important, because this is roughly the distance between most medium-haul telecom offices.

The breakthrough was possible not only by combining several small cables into one. Each sub-fiber was also given a boost by taking advantage of the phase and polarization properties of light. The phase of a wave of light is determined by when each crest reaches the receiver. It’s polarization is determined by the direction the wave is “wobbling.”

Sending different signals along waves with different polarizations and phases made it possible to send additional signals through the same sub-fiber. This gave each sub-fiber 4 times as much information density over previous attempts.

This breakthrough exceeds previous attempts by more than ten times.

Related: City of Light: The Story of Fiber Optics

Not too long ago, we discussed a topic called change blindness, where people are unaware of sudden changes in their environment because of our limited perception. Lars Hall and other researchers at Lund University in Sweden recently demonstrated something related: choice blindness.

In the experiment, survey takers were asked to fill out their opinions on four statements. It was designed so that when they participants closed the clipboard, the original statements were replaced with statements where a single word had been changed to completely reverse the meaning of the statement.

For example, the original statement could read “Large-scale governmental surveillance of e-mail and Internet traffic ought to be forbidden as a means to combat international crime and terrorism.” The replacement would read the same, except the word “forbidden” would be replaced with “permitted.”

When the experimenters asked the participants to explain why they chose the answers they did, half of them did not realize their answers had been changed, and 69% accepted at least one of the two altered statements.

Most shockingly, 53% of the participants argued completely in favor of the opinion that they originally argued against, offering complex arguments for why they chose the answer that they…didn’t actually choose. The implications that this has for our ability to be persuaded, and our overconfidence in our previous choices, is a bit alarming.

There are stem cells living inside your muscles right now, waiting to repair damage from exercise and injury. After exercise, these stem cells transform into muscle cells and help rebuild the damaged tissue. The leftover stem cells return to the original “pool” of stem cells, helping it return to it’s original size.

An international team of scientists investigated the stem cells present in aging mice, and may have discovered why muscle mass declines with age. They discovered that the number of stem cells in their muscles diminished as the mice grew older, inhibiting their ability to maintain muscle strength.

By administering a common FGF2 inhibiting drug, the researchers discovered that they could prevent the unnecessary decline of stem cells in the mice’s muscles.

The researchers, from King’s College in London, Harvard University, and Massachusetts General Hospital, are careful to caution that we are still a long way from preventing or reversing muscle loss in humans, but this marks the first time a mechanism has been discovered that causes muscle wasting, or that prevents it from happening.

A recent study on rats suggests that you might be able to improve your memory of certain events during the day if they are linked with specific sounds.

The hippocampus, located in the center of the human brain, plays an important part in forming new memories. While the memories are not stored in the hippocampus, it helps write them.

During sleep, “replays” of events that occurred during the day are known to spontaneously occur. This is thought to influence which memories end up in our long term memory, and which end up getting deleted (which is actually an important part of good memory function).

At MIT, Daniel Bendor and Matthew Wilson trained rats to perform an auditory-spacial task and recorded activity from their hippocampus while they did so. If the researchers played the auditory stimulation from the task while the rats were sleeping, they discovered that these same activation patterns would show up in the hippocampus.

No guarantees, but you might find it easier to remember something important if you listen to a particular song while you absorb the information, and play it again at night.

Related: The Mind at Night: The New Science of How and Why We Dream