In today’s Friday Roundup we spot evidence of superconductivity at room temperature, and researchers beat a record for transforming heat directly into electricity. Meanwhile, the genetic evolution of a new trait in bacteria is documented in detail. 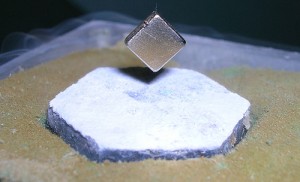 A magnet floating above a superconductor

You wouldn’t expect much to happen if you stirred up some graphite powder in water, let it sit for a day, filtered it, baked it overnight, and allowed it to cool.

But Pablo Esquinazi and colleagues at the University of Leipzig in Germany have discovered properties consistent with superconductivity in these granules, an effect that causes a material to lose all electrical resistance and virtually eliminate heat losses. (In other words, a circuit made from a superconductor can carry an electric current almost indefinitely, even if it is disconnected from a battery, so long as the electricity isn’t used up by an external load.)

Specifically, the researchers were measuring the “magnetic moment” of the material. A magnetic moment is a figure that determines how much force a magnet can exert on an electric current within a conductor.

The behavior of the magnetic moment under various conditions suggests the existence of phenomena called “quantum vortices.”

By their nature, superconductors expel magnetic fields from their interior. When an external magnetic field becomes strong enough, bits of the field can become absorbed and carried through the superconductor as single units of magnetism, disconnected from the external field. These are called quantum vortices.

The experiment suggests that superconductivity is possible at room temperature in graphite. At this point, the researchers are close to stumped regarding why this is occurring, so it is a long way from a breakthrough that would revolutionize the energy and computing industries.

That said, if this turns out to be genuine room temperature superconductivity, it means that sending electricity without losses is physically possible on Earth.

Nanomaterial Sets a Record for Converting Heat into Electricity

If we can’t build a superconductor, this could be the next best thing. Fancy the discovery happened around the same time.

When it comes to energy technologies, heat is usually thought of as that pesky “waste energy” that can’t be put to good use. Only about a third of the energy from a power station is converted into electricity, for example.

For a long time now, physicists and materials scientists have been looking for ways to convert heat directly into electricity. There is, of course, the method of using steam to turn a turbine, and other indirect methods, but a class of materials called thermoelectrics promises to do for heat what solar panels do for light.

None of this means current thermoelectic technology is useless. In fact, the Mars Curiosity rover is currently using them to extract electricity from its nuclear core.

But now, researchers at Northwestern University in Evanston, Illinois, have set a new record for thermoelectrics.

They augmented a well known thermoelectric material, lead telluride, by disrupting its crystalline lattice with sodium atoms. The resulting disorder in its structure allowed electrons to pass through, but slowed the molecular vibrations we call heat.

Finally, they created fractures in the crystal, which effectively “reflected” heat vibrations while allowing electrons to pass.

The new nanostructured material was capable of transforming 15% of heat energy into electricity, a twofold increase over typical lead telluride, and a new record.

Researchers Document the Evolution of a New Trait in Bacteria

Zachary Blount, who led the experiment

In defiance of the criticism that evolution is an untestable theory, researchers at Michigan State University documented the genetic mutations necessary for a bacterial colony to evolve a new trait, step by step.

The bacteria, E. coli, evolved to digest citrate, a substance that they can’t typically digest when oxygen is present.

The evolutionary process occurred in three phases. In the first phase, the bacterial DNA underwent genetic mutations that weren’t directly related to the task at hand, but were necessary for it to occur. In the second phase, a mutation occurred that allowed them to digest the citrate. In the third phase, further mutations refined the process.

The actual mutation that allowed the bacteria to start digesting citrate was far from normal. Rather than a single letter being improperly transcribed as usual, entire pieces of the DNA were rearranged, creating an entirely new “regulatory module.” Such modules don’t create proteins themselves. Instead, they regulate how other genes are expressed. This change allowed the production of proteins that brought citrate inside the cell even while oxygen was present.

While evolution in E. Coli may not seem terribly relevant to us, documenting the evolution of a brand new trait gives us insight into how the evolutionary process works. If this is typical, it means that some aspects of evolution occur in (relatively) short bursts.

Related: The Epigenetics Revolution: How Modern Biology Is Rewriting Our Understanding of Genetics, Disease, and Inheritance